Sometimes, things just fall into place for a room makeover and it is quick and easy and fairly inexpensive.

That’s what happened with a surprise makeover for my son’s room last fall.

Deciding to makeover his room began when I started searching high and low for a duvet that went with the original, red and blue airplane-themed room. He needed an extra layer of warmth during the winter.

After months of searching, I couldn’t find a duvet in the right price range that worked with his room. But there was this orange and grey plaid duvet on clearance at Pottery Barn Kids I kept watching. 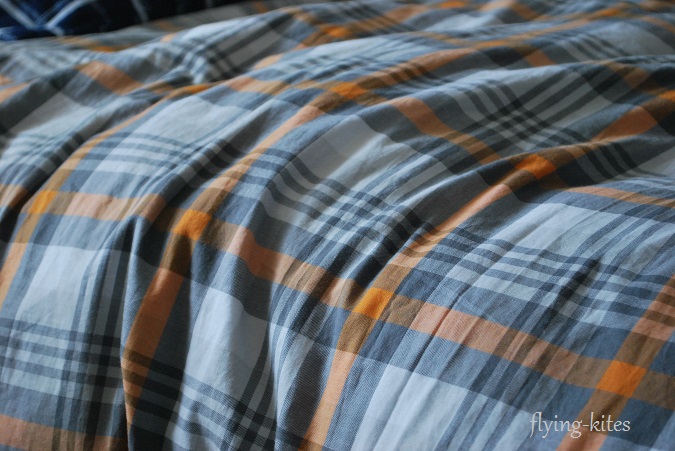 Then I found an entire gallon of “oops!” paint in light grey at Home Depot. For seven dollars.

Around this time, we went to Portland and I found the most amazing orange chair for $10. 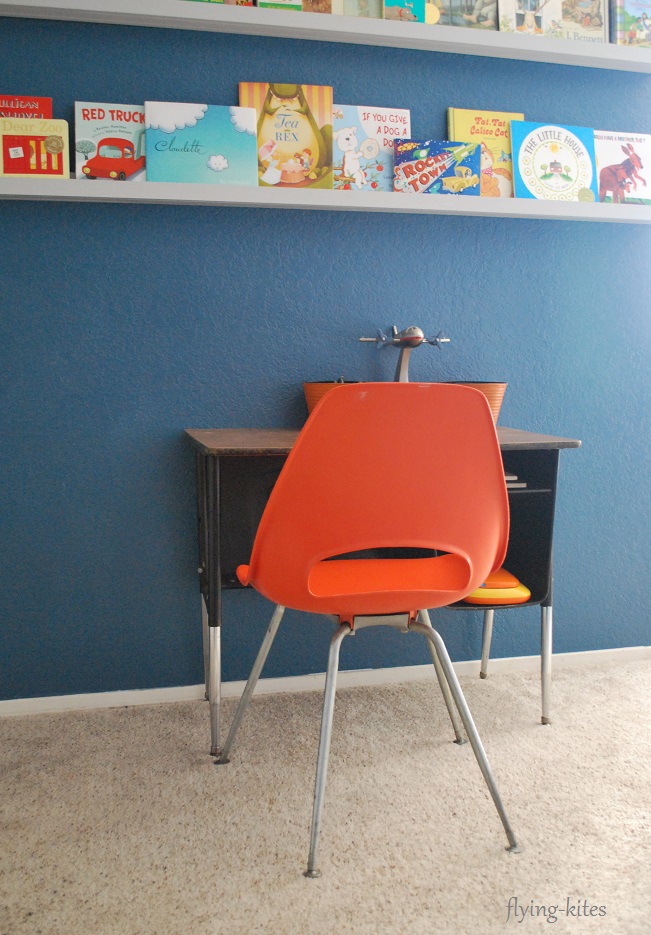 {because, really, this makeover is for my entertainment}

to purchase the duvet.

And I pulled in a set of vintage campaign nightstands that were floating around the house looking for a home and gave them a makeover too.

The set fits perfectly under his window and holds almost all of the toys. 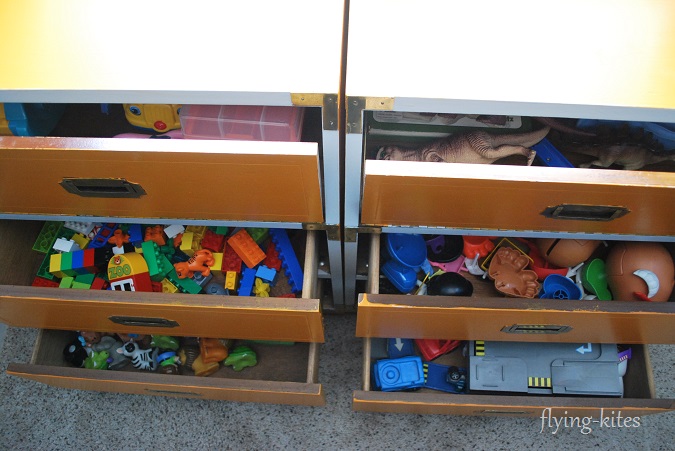 An old shipping crate, original to his room, holds the rest.

I had a beautiful cream armoire with glass-front doors that was originally in my son’s nursery . In fact, it was the first piece we bought for his nursery and held a lot of emotional attachment. But the piece was giant and even though his toys stored great below and the books behind the glass doors, it really wasn’t working in the room. The armoire screamed “baby” or even “little girl”. So I went through all the books, kept only the favorites and listed the giant piece on Craig’s List. The money gained from the piece helped offset the other expenses towards the makeover. It was now time to pull my handy husband in for some custom work. 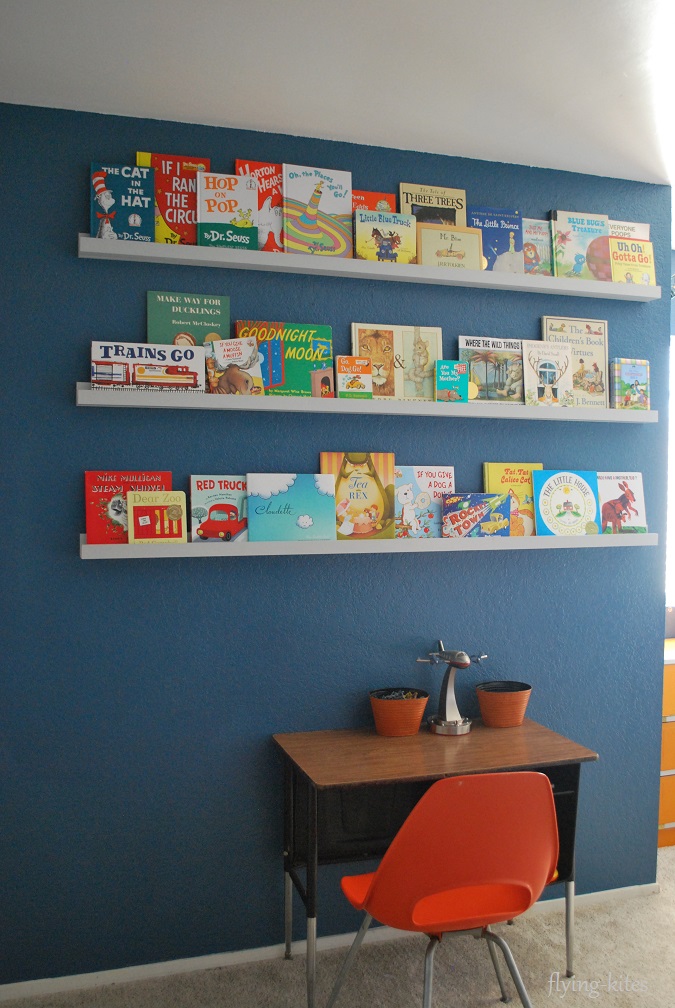 He built me the most beautiful wall bookshelves for around $35 and painted them the grey from the oops! can of paint.

Then over a three-day weekend, we moved my son’s mattress into my daughter’s room while we did some major painting. In the room before, we had a thick red stripe near the ceiling, which we painted over and also painted the far wall gray for an accent wall. The bed, built by my husband, was red, so I painted it orange just like the campaign nightstand. The rest of the week, while my son was at preschool and my daughter napped, I turned on Netflix and painted orange and blue triangles all over the gray wall (and almost lost my mind).

Due to our walls being heavily textured, the triangles ended up taking the longest. After I initially painted them, I needed to do a second coat, then touch-up…

I also rearranged the vintage-inspired alphabet cards originally over the bed hanging precariously by putty. The cards are now across from the bed neatly hung by metal clips.

The triangle week was when everything came together and I completely rearranged his room and pulled in a couple new things, like a school desk and the orange chair. I also took away a few decorative airplanes. 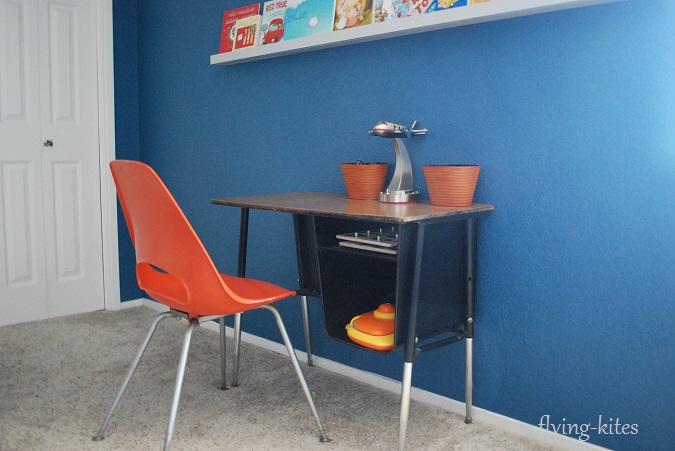 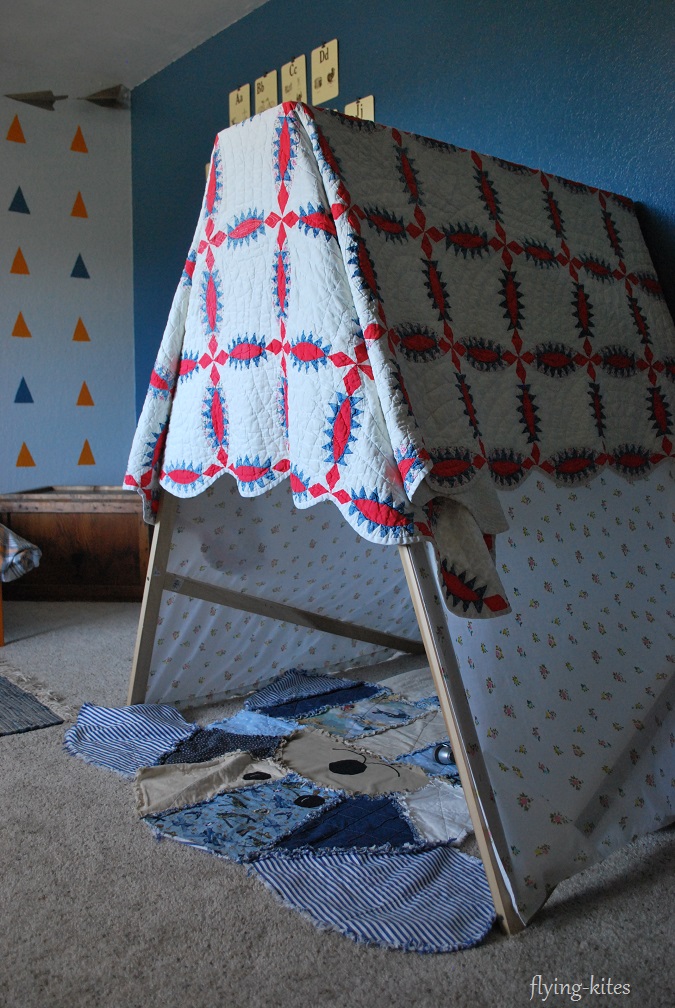 The result is less about airplanes and more about my son {he loves the color orange}, a space for playing, and a spot for everything. I think by stepping back and focusing on a color theme, rather than a “stuff” theme, this room supports all of his interests (and constant changing mind!) better.

I’m always curious in room makeovers, what was original, what was handmade, what cost so much… and if it was worth the cost – so here’s the breakdown, as best I can remember it:

Original to the room – from the original nursery + toddler update:

Alphabet Cards ~ The Land of Nod

Tent ~ Built by Duane; Linens are vintage from my grandmother

What I added – purchased originally for other areas of the home

What I added – purchased specifically for the makeover

I sold the armoire for $150, which pretty much covered the cost of remaking the room. So what started out as keeping my son warm through the winter turned into a great time to refresh his room for very little cost.